Are you ready for picture overload?? Once we arrived in Colorado and played the first day it was so fun trying to get Mason to go to sleep. His excitement for ski school was funny. He wanted to sleep in his ski boot, with his skis, and his helmet. I snapped this photo below of him in his bed with his helmet on. He had climbed out of bed and grabbed it and put it on all by himself. 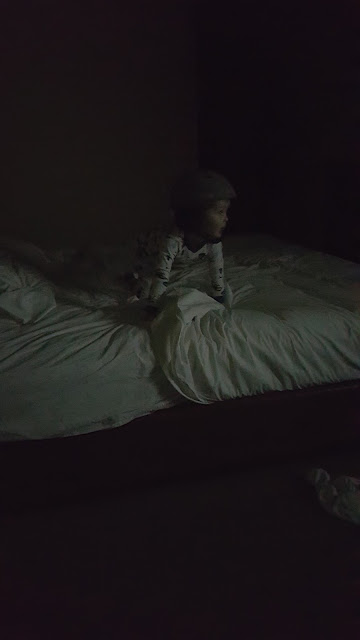 I actually was surprised how easy dropping him off the first day was and that was a relief to me. I didn't worry about him at all the first day. His instructor seemed very nice and knowing that Mason was his only kid made it so much easier. Mason pretty much got private lessons the entire time we were there. Go at a slow time and it will probably happen to you too. 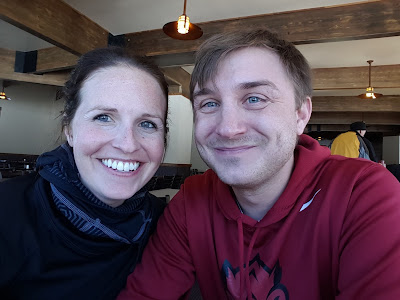 Lunch with my sweetie to get warm. 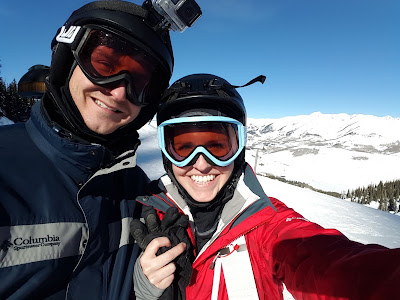 About to do the bowl. 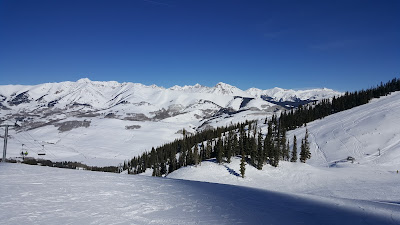 The top of Paradise. I love this mountain. 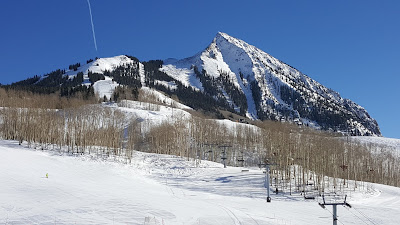 It was a Blue Bird Day!!


After a long day of awesome skiing, I felt great, my knee felt great and the weather was wonderful, we went to check out Mason. Our instructor sent us a text letting us know they were having a snack and then going back out to ski if we wanted to come watch. I was so happy he sent that message to us. Mason did so great. I was seriously impressed with his skills after only a couples hours of skiing. In the Cubs group, they ski an hour in the morning and an hour in the afternoon. They snack, play, sled and do other fun activities with the kids. Mason the first day skied 3 times. 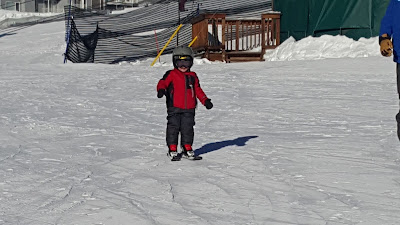 At the end of each session of skiing they sled back to the ski school inside location. Mason counted down and loved it. I think he might have enjoyed sledding as much as skiing. 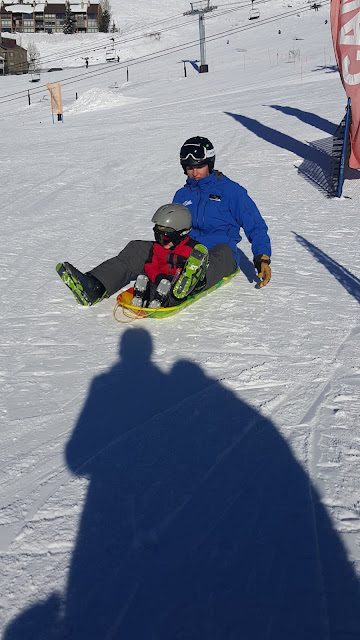 We decided to brave dinner out only 2 nights. Most of the time Mason was exhausted and really was better off staying in and ordering food out. We went to the Secret Stash one evening. It was great. It is a pizza place with lots of specialty pizzas. 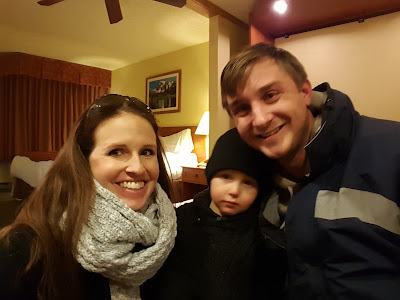 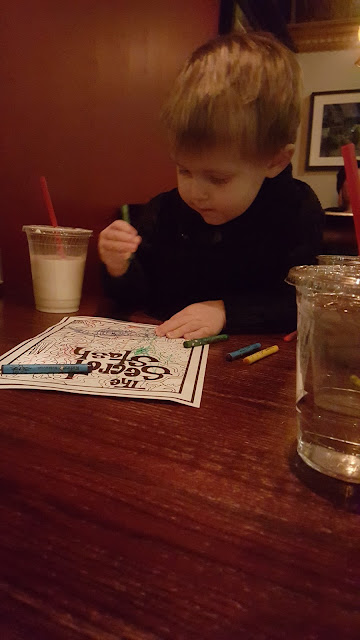 
On the second day skiing, Michael and I went all over the mountain. We were trying to hit every blue on the entire mountain. Towards the end of the day we took a lazy green from one side to the other. It has the best views you can ever find. 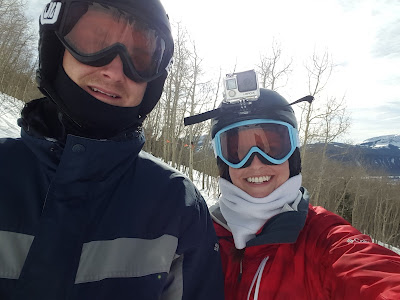 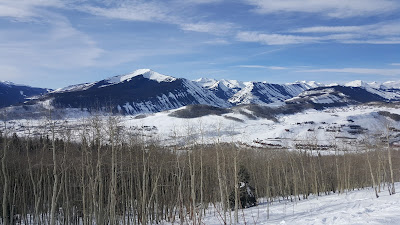 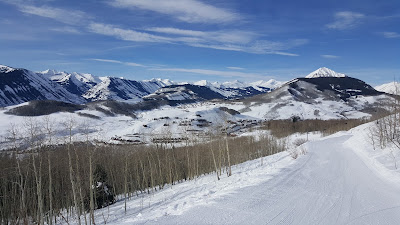 We went back to get Mason and watch him ski. He was so tired this day. His instructor told me they had been out 6 times. Mason kept asking and since he was the only kids, the instructor was game for it. Mason's instructor was so good with him and in the morning when we walked into ski school Mason asked Where is the Guy? He wanted to play with Ian. It was great. 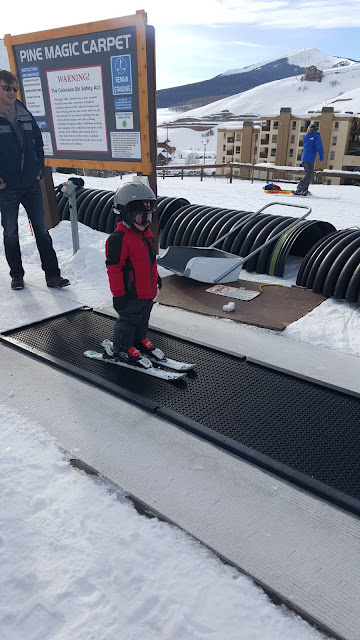 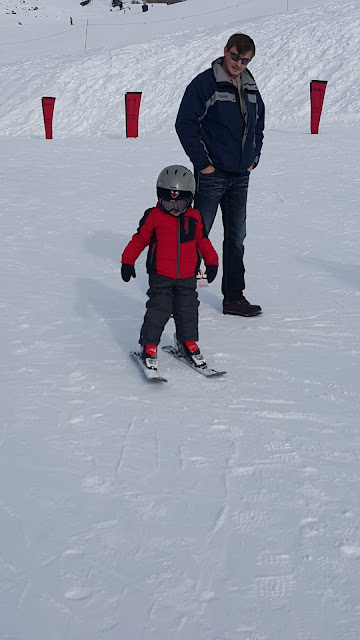 Showing off his new skills. My kiddo refused to wedge and if he wanted to stop he would hockey slide or parallel ski.

The last day was hard. It was snowing, which I LOVE!!! But it was cloudy and hard to see where we were going. I hit a few bumps a little too fast and got some air, so after I almost ate it all morning on blues I told Michael I wanted to do some greens. I don't need a third knee surgery. 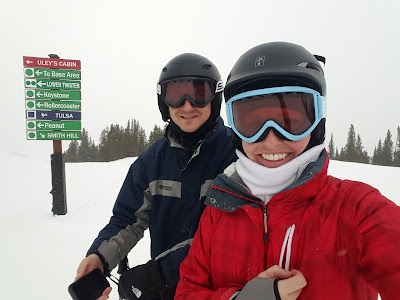 The third day of ski school was by far the hardest on Mason. His favorite instructor wasn't there, as it was his day off. Mason didn't understand that and he cried and cried and cried. He didn't want us to leave. I figured he would be fine when we left and since it was so hard I told Michael we had to get him early. We headed down the mountain at 2:00 to get him and he was passed out, so Michael and I headed to have a drink before we went back. An hour later, when we arrived he was up and he was crying. Poor baby. He really missed Ian. We took him out to ski with him. 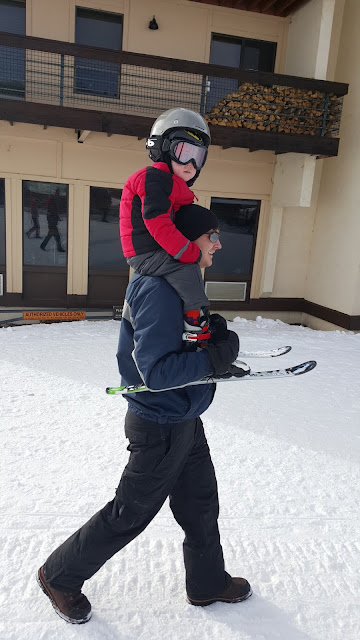 Good Daddy. Mason was exhausted. 3 days of skiing was a lot for him. 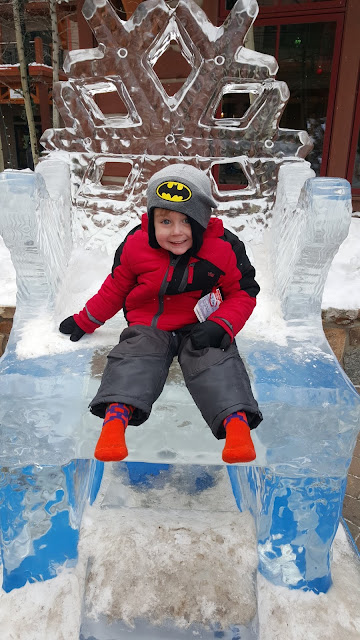 After we took our skis back to the rental shop we let him play on the ice. He was refusing to put shoes on his feet and kept saying his feet hurt. If you have ever gone skiing you understand. Everything is sore from the boots. 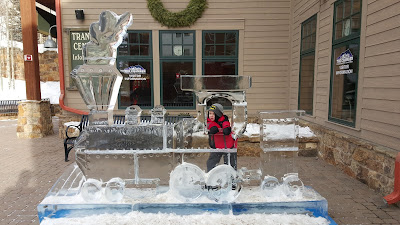 
The last morning in the mountains. Mason was so excited to go home. He kept saying he wanted to see Nana and Papaw and sissy. Me too bud Me too! 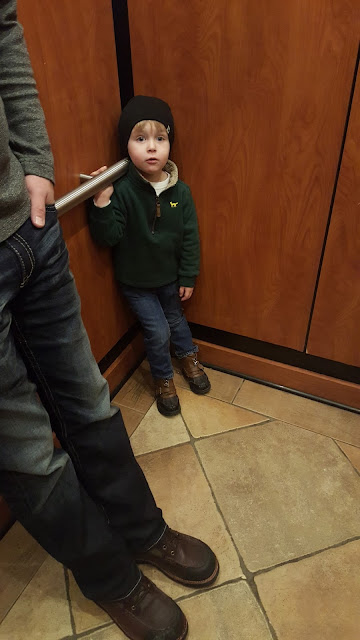 But before we left we had breakfast and a little game of pool. Future pool shark in the making. 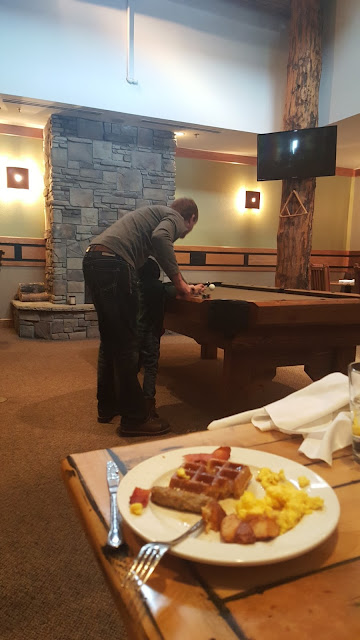 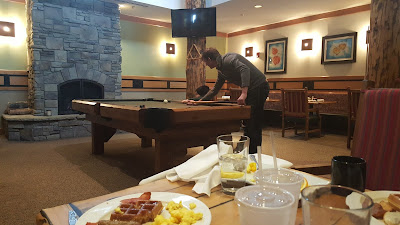 I snapped this picture in the airport. I had to. It was Mason's first time to ever have a Happy Meal. I cannot believe we made it 3 years before he had one of these. Especially because this Mama loves nuggets and fries. 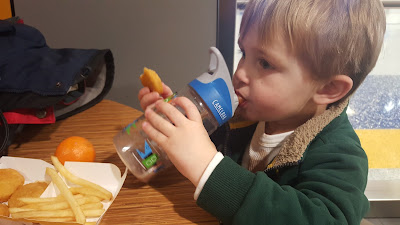