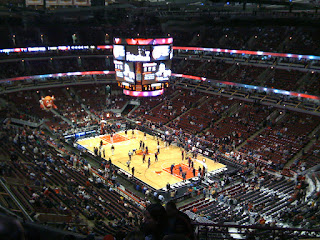 A few weeks ago Michael and I attended our very first Bulls basketball game.  The game was against the Atlanta Hawks.  We were both fairly excited about the chance to go to the game, but the game was definitely not very exciting.  I was more interested in seeing Joe Johnson, who used to play basketball for the Razorbacks.  Go Hogs!  The bulls lost the game 105-102, which was perfectly okay with Michael and me.  Both teams playing was pretty disappointing to watch, especially knowing how much they get paid.  They play harder and better in college basketball.  Oh well.  Now we can say that we went to a bulls game while living in Chicago.
Look for lots of updates over the next few weeks, Michael and I have several fun activities planned for the next month.  We are going snow skiing in Wisconsin with the Arkansas Alumni group and Colorado with a friend of mine.  We are also officially moving into a new apartment.
Posted by Married Sperrys at 1/31/2009 No comments:

A ton of things have happened in the last month with Michael and me.

We had Christmas in Arkansas, which was very enjoyable. We drove from Chicago to Arkansas the Friday evening before Christmas. Our drive was the day after all the ice and snow had hit the Midwest, needless to say we still drove down. It took us a lot longer than normal to get to his grandparents house in Bella Vista, but luckily my Rogue made it in one piece. We spent the next several days driving between Fort Smith and Rogers to spend time with both families. I insisted that Michael come with me to Aden's 2nd Birthday party at Chuckie Cheese. He, both Aden and Michael, had a BLAST! We spent Christmas day apart and with our families. Here are some fun pictures that Michael's mom took of us at her house. 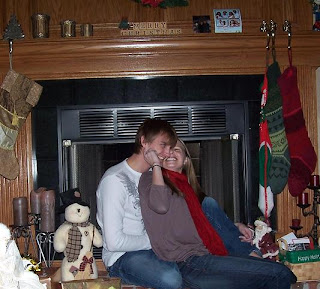 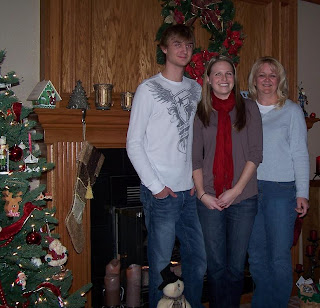 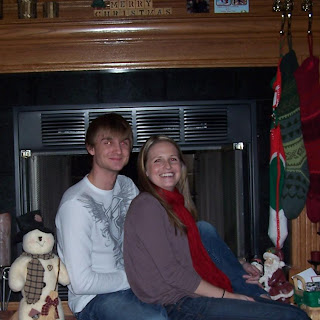 We had a good Christmas Break from the cold and snow in Chicago. We came back to the cold the Saturday following Christmas.

New Year's Eve in Chicago was fun for us. We were very boring and just stayed home, ordered takeout, and watched movies. We both had to work that day plus it snowed several inches per the usual.

Last Friday, January 9th, I learned that my grandmother had fallen and hit her head, sending her into ICU. I flew to Arkansas first thing Saturday morning to be with her and my family. Thank goodness for my job. I was able to work from home, or the ICU waiting room, Monday and Tuesday, and hence spending more time helping out. I hung out with my grandmother as much as the ICU nurses would let me, and ensuring they were taking good care of her and her attitude. Now she is recovering well and getting to move into a new room.

Since I have been back in the city, we have had the coldest weather in 10+ years. This morning I woke up to -17, yes that would be negative 17. Michael's car would not even start due to the cold and my car did not like the cold either. Tomorrow will be a lot warmer, 25 degrees. It will feel like summer.