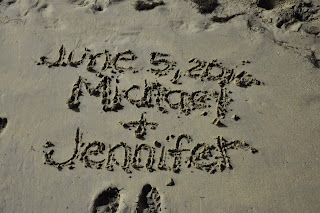 Michael and I went to St. Thomas for our honeymoon. We left two days after the wedding, which was the greatest thing in the world. I cannot imagine leaving the day after the wedding.
We got to St. Thomas late the first night and it was dark, so we really had no idea where we were or even where our taxi was taking us. I think it made Michael nervous, he had his iPhone out with the map and route. When we got to our hotel and got checked into our room or should I say
large apartment. It was a two bedroom, two bathroom villa with a kitchen and living room. Even though it was dark we could tell we had an ocean view and a view of the town. 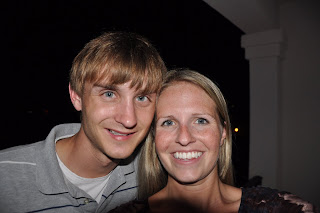 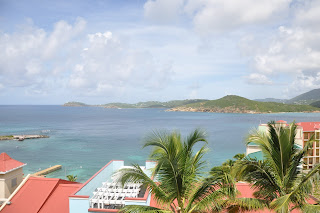 View from our room 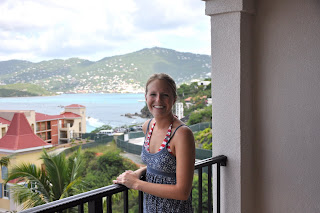 The first full day on the island all we did was lay on the beach. Anyone who knows Michael and me knows that our vacations are not the typical relaxing vacation. We go, go, go. Well not this vacation, we relaxed and tried to enjoy the down time. So, we spent many days on the beach, but that was perfect. We had a reef on our beach which attracted lots of creatures and even several blacktip reef sharks. The sharks were cool to see from a distance and the hotel staff did inform us that they are harmless babies and their mouths are too small to bit anyone. After that he did tell us they tagged the mother and an alarm would sound if she got within 1000ft of the shore. I am sorry but 1000ft is not that much considering how fast a shark can swim. Michael has always wanted to swim with sharks and he definitely did, it took a lot to get me to stay in the water. 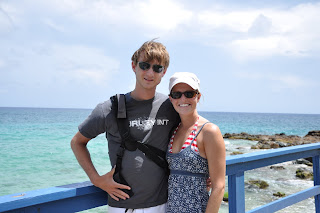 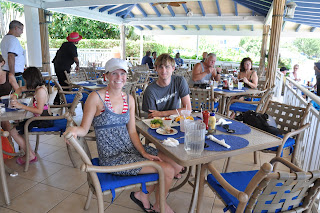 One day Michael and I went into the town of Charlotte Amalie mainly to do some shopping and a couple of site seeing adventures. I am a big nerd and really wanted to go to Blackbeard's Castle. Go ahead and laugh away, but it sounded fun! One super thing about shopping in St. Thomas is that it is all duty free. No Tax! I was not too impressed with the shopping but they have tons of vendors and they sure wanted to sell us stuff. After a little shopping we decided to find the 99 steps (102 actual) to Blackbeard's castle. On the way up the steps we stopped at this cute little bar that had the world's largest amber waterfall inside. It was man made. I found the steps going to the castle really neat, they are the original steps from 1679. When we made it to the castle, we learned it was closed. I was sad. Apparently when St. Thomas does not have 6 cruise ships in they don't even bother to open. BOO! So, I just enjoyed the view from the outside and the view of the harbor. 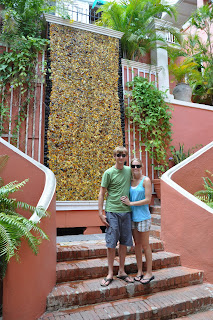 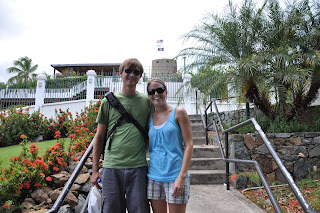 Blackbeard's Castle Behind us 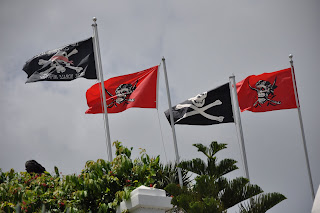 I thought the flags were a nice touch 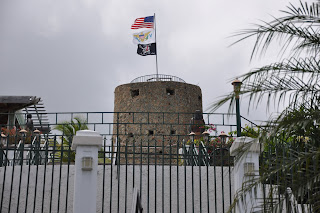 About as close as we are going to get 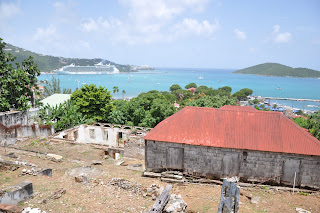 Major J.M. Magen's Home (1820s)
While in St. Thomas, we decided to go and take a tour of St. John. We heard how beautiful it was there and so we found a group that picked us up at the Marriott's dock and takes you over to St. John, then drives you around the island, and takes you snorkeling at one of the many beaches. After going to St. John, I wish we had stayed there instead of St. Thomas. The island's beaches were gorgeous. I have never been to a beach I liked better than the ones on St. John. Don't get me wrong St. Thomas also had wonderful beaches, but nothing could beat St. John. On our tour, they took us to a sugar mill where they made rum. It is no longer making anything but it was very cool to see. 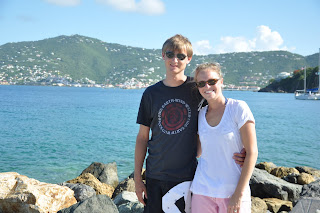 Waiting on our ride to St. John 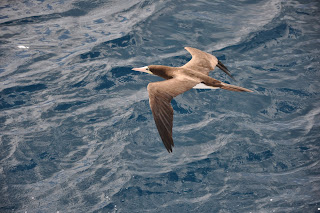 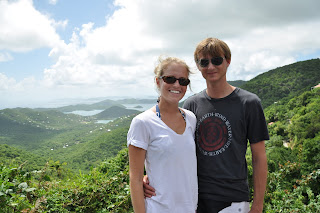 View from the highest point 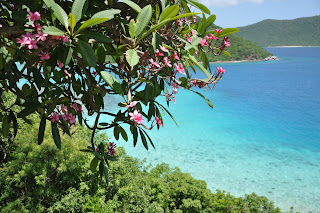 From the Sugar Mill 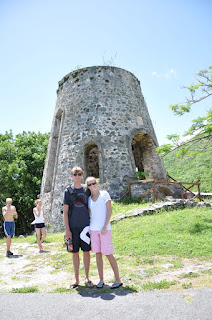 Us at the Sugar Mill on St. John 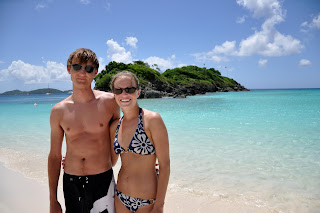 At the Beach where we snorkeled 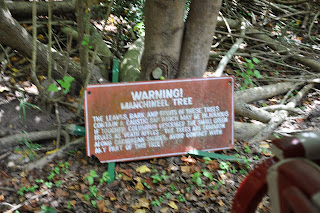 Our guide stopped to warn us about these trees 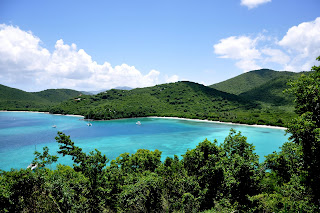 Views
One thing St. Thomas was not lacking was the amount of shopping. I think Michael and I went shopping everyday in some way, even when we went to St. John. Yacht Haven was my favorite spot on St. Thomas. The shopping was good, food was good, and we got to see some fun fish. 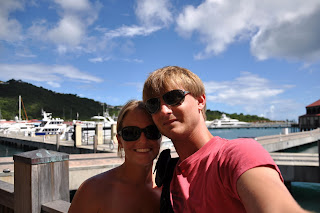 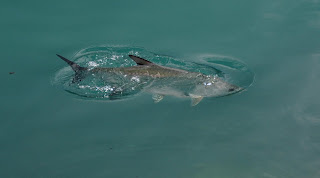 Some Fish Michael was excited about
We ate at a lot of fun places and got the much needed rest after the wedding in St. Thomas. If I was to go back I would probably do a few things differently. One stay on St. John and take the ferry to St. Thomas. Two, take lots of friends or family. Three, take Michael deep sea fishing! We had a blast and I am glad I can say I have now been there. 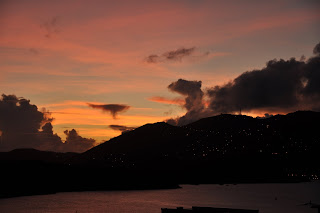 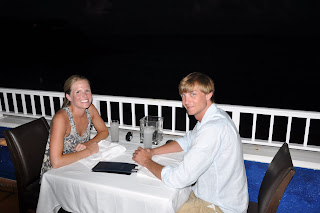 Dinner at the Marriott 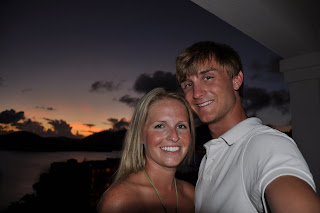 We definitely got some sun!
Posted by Married Sperrys at 7/26/2010 No comments:

Where did the weekend go?

The weekend came and the weekend went away. I feel like I did nothing this weekend, but that's not true. Friday night, Michael and I did yard work. Super fun! Michael's mom also came over for a visit Friday evening. She had some leftover wedding presents for us to open.
Saturday, I drove all over Fayetteville looking for the correct size air filters. Really who knew that could be so difficult. I first went to Wal-Mart mainly because I wanted to get some groceries, and they didn't have either size air filter we needed. I went home dropped off my cold items and went to Lowe's expecting that if Wal-Mart doesn't have them, of course Lowe's will. Nope. Okay, I take that back I needed two different sizes and they had one of them. At this point I am getting mad, and thinking I am going to have to special order myself some air filters. I was also upset because we live in a brand new house and they had to make it difficult. As I was driving back to the house I tried calling Home Depot. Not only did Home Depot have the sizes I needed they had choices! I think Home Depot is going to be my new home improvement store to shop.
Saturday evening we went over to the Eikenberry's house for a house warming party. They were grilling out and having people over on a nice summer evening. We had a ton of fun. It was good food, good company, and fun games. We played bag-o and after all the "grown-ups" left the children stayed up and played battle of the sexes (adult version). All I have to say about that game is that a guy made the game up. The girl ask guy questions were SO easy...any guy who remotely pays attention to E! or listens to his wife would have known the answers. The guy ask girl questions were hard. Every question was about cars. I mean come on people...ask about sports, at least I have some knowledge of sports. Well, I shouldn't complain too much, the girls actually did end up winning or at least we were ahead when we decided to stop.
Sunday, Michael and I went and saw the movie Inception. I really, really liked the movie. I would recommend it to all. If you haven't seen the preview watch it on YouTube. It was one of those movies that some extremely creative person must have written. I am still thinking about the ending!
Posted by Married Sperrys at 7/26/2010 No comments:

Wedding Over = Back to Blogging

The wedding is over and it was wonderful. I was the happiest person on June 5th. Lots have been going on since the wedding...
Michael and I went to St. Thomas for our honeymoon. It was a blast, and I will post pictures and do the whole describing of activities. Sorry to disappoint but we didn't do near as much as we normally do on vacation.
We found out Michael's youngest brother, Steven, got married in March. Congrats to him and Katie. We also recently found out we are going to be an Aunt and Uncle. I am very excited to get the opportunity to spoil another little boy or girl. Michael will hate me for it, but that's okay. This will be the first "real" niece or nephew for both of us. I basically already have a niece from my best friend in Hawaii, and I love to send things to Miss Schuylia.
We have been playing softball all summer, co-ed team, and it has been fun. We aren't the best team in the world, but it is summer and it is for fun! We also have been going to the lake a lot and I love the lake. I would love it more if Michael and my parents would let me wakeboard...I don't know why they won't let me (two knee surgeries later and I am ready to do it again). My cousin and her family have come with us a few times and I love that. Aden is at the perfect age, 3, where everything is SUPER cool.
I have been traveling for work a little. Went to a very exciting place last week, Des Moines. Most frustrating travel day I have ever had. Lets see, supposed to travel through Chicago and get home at 11:00 those were the initial plans, but I was delayed coming out of Des Moines which meant missing connection in Chicago. Then it was travel through Dallas, leave earlier and get home at 8:30 (YAY earlier), then the earlier flight was delayed and I missed the connection and got on the 9:00 flight home which still was going to get me home earlier, nope because of my day that flight was also delayed and I ended up getting home at the exact same time I originally was scheduled. Got to love those kind of days. Next week I am going to Chicago, and I will get to see my brother!!! Should be a fun weekend. Hopefully getting there and getting home won't be as weird.
One more update and then I am going to retire. Now that I feel like I have a ton of free time in my life again, I have decided to take up a new hobby. This new hobby is fun for me, but probably won't be to anyone under the age of 65. I have picked up where my grandparents left off, 10 + years ago, doing family genealogy stuff. Yup, I am a nerd! So far, it has been very very fun. I think for me it is a way to connect all over again to my grandparents, even though I don't have any living, I know they enjoyed learning about our family's history. It is nice, I have already gotten to talk to some of my Great Aunts and get information from them. It is always good to see how the Southern Arkansas family is doing. I think I need to make a trip down there soon.
Posted by Married Sperrys at 7/22/2010 No comments: