The moon was the closest it would be to Earth on Saturday…at least for another 20 years.  I took this opportunity to grab my camera and shoot a few pictures of the large moon.  It was a perfect night.  Clear and I think you could even see that man in the moon.  I love that my camera was able to get such a great photo of the “Super Moon.” 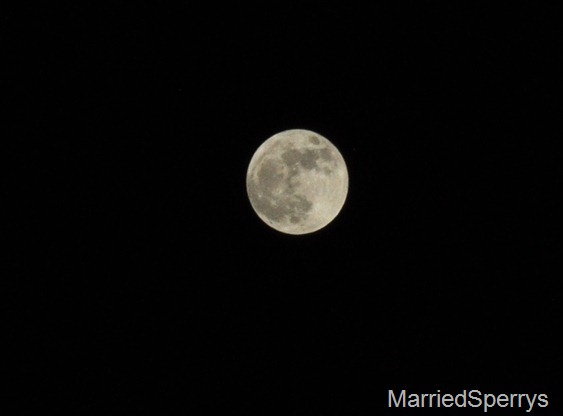 Gabby should have been named…

Sometimes Michael and I joke that we should have named Gabby, Nana.  As in Nana the St. Bernard from Peter Pan.  When our friend’s little girl, Stella, was a baby, Gabby would always go to her if she was crying.  She also used to follow her around like in the picture above when Stella was still shaky in her walking.  It was precious at the time.  They have basically grown up together.  We got Gabby when Stella was only a few months old and they have been bonded ever since.

Sometimes when we went over to there house and she was in her bed and started to cry Gabby would run to her and run back to us…trying to tell us to go get her.  It was sweet.  Now Gabby continues to keep an eye on her.  They play together and if she falls down Gabby is right there to lick her as if making sure she is okay.  Stella really thinks Gabby should listen to her and she tells Gabby good girl and bad dog.  She likes to repeat what we say to Gabby.

Last night, Gabby and I went down to grab something and Stella was outside playing.  I wish I was video recording what happened next.  Stella decided to go down the slide head first.  This is not the first time.  Apparently head first is way more fun.  Gabby was watching her from the bottom of the slide getting set.  Gabby started to whine and get down low and bark at her.  It was as if Gabby was saying not safe…don’t do that.  Stella was laughing at Gabby telling her…Gabby watch me.  So as Stella started to let herself go down just a little Gabby went crazy.  Running all over the yard and back to Stella to bark or whine.  In my world I think she was saying…OH MY goodness…OH NO!  It was hilarious because this continued until Stella made it all the way to the bottom of the slide.  As Stella stood up Gabby was right there in her face licking her face and arms…checking to make sure she was okay.  Stella, of course, laughed and loved the kisses.  Finally Gabby was relieved.

I told Michael this story later last night and he told me that we should have definitely named her Nana.  She is a little worry wart.  Sweet and loveable and always worrying about the safety of her “kids.”